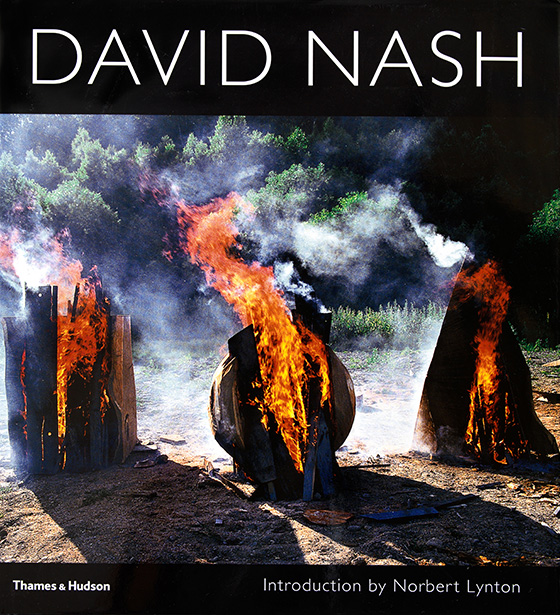 For over 40 years, David Nash has made sculpture almost exclusively in wood. At the core of his work is a profound and ever-growing knowledge of trees, enabling Nash to engage closely and intuitively with the varying characteristics of each species of wood that he uses. The extensive statements by him in this book provide a unique insight into both his working methods and the thought processes provoked by this extraordinary collaboration with trees. Early on, Nash rejected the hitherto unchallenged notion that only unseasoned timber could be used by artists or craftsmen. The direct result of this is that in much of his work, the moment when he has finished carving a piece is only the beginning of the development of the sculpture as it reacts to heat, light, moisture or drying.

In the late 1960s, he moved to the Welsh slate-mining town of Blaenau Ffestiniog, where he bought a redundant chapel to use as both living space and studio; the crucial role of the chapel as a home for a developing and shifting population of sculptures is chronicled here for the first time. From this base, he has produced a stream of works, sometimes closely related to the landscape in which he lives, sometimes made abroad. Often when he works away from home, he has been invited to a place where an abundance of fallen wood provides the opportunity to make a whole family of sculptures hailing from the same source. This books focuses particularly on three of these worksites, referred to by Nash as ‘wood quarries’, in France, Spain and Japan.

On a piece of land not far from his home, Nash has for over 30 years been planting and then coaxing groups of trees to take on forms such as domes and bowl shapes. These subtle, beautiful sculptures are, in Nash’s words, ‘coming’ or growing works. Others, which he sees as ‘going’ works have been made with the intention that over time they will merge again with nature. Perhaps the most impressive of these is a roughly spherical oak boulder a metre in diameter, which he made in 1978, and then launched into a nearby stream. Over the next 25 years, and with only minimal intervention, he recorded its progress towards the sea, until it finally disappeared.

Also presented here are numerous examples of sculptures dealing with a favourite theme – the universal forms of the cube, the sphere and the pyramid, as well as Nash’s highly innovative black sculptures, produced by a controlled charring of the forms which are very different in impact from those left with their natural wood colour.

This lavishly illustrated book has a substantial introduction, tracing the career of David Nash and evaluating his sculpture, by the distinguished art historian and critic, the late Norbert Lynton, who knew and followed the sculptor’s work from the late 1960s.