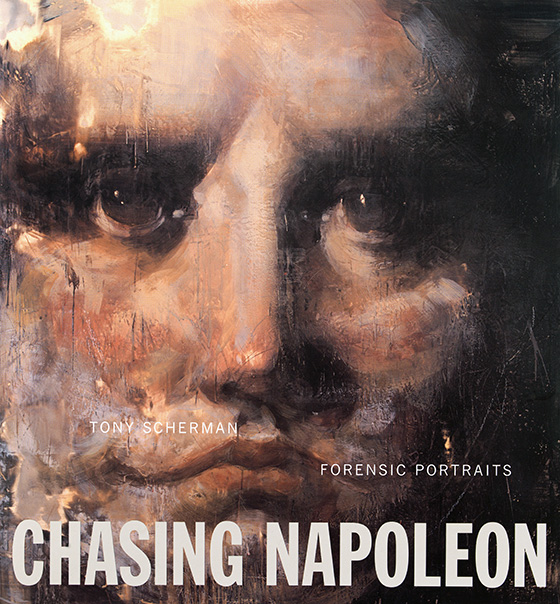 Currently out of print. A few copies available direct from Cameron & Hollis

Tony Scherman’s Chasing Napoleon presents a remarkable tour de force: a cycle of monumentally scaled portraits of Napoleon Bonaparte, each of which depicts Napoleon at a psychologically charged, life-determining juncture. Through exhaustive documentary research – ranging from celebrated commemorative paintings, official and unofficial portraits, to prints, illustrations, cameos and coins – Scherman has arrived at a historically derived, composite image. His method of artistic conception could perhaps be called ‘forensic portraiture’. Confronting the challenge of producing an accurate likeness of a historical figure whose reign preceded the age of photography, these paintings metaphorically chronicle the life of Napoleon using only the image of his face.

The cycle begins with Napoleon’s First Shave and the gaze of a callow, but fearless young man, and concludes with The Last Shave: St Helena, when, on the eve of his death, an introspective and beleaguered general contemplates his arsenic-sealed fate. Battlefield genius, despotic emperor, megalomaniac conqueror, derided hero . . . each of these possible incarnations of Napoleon flickers through the paintings, invoking the flash of charisma as quickly as this is complicated by darker undertones which inform the observer’s encounter with these masterworks of portraiture. Shimmering behind each portrait is the implied history of France, its political, social and cultural narratives, which underwrites subtle shifts in the composition and treatment of the surface.

Central to the extraordinary power of these paintings is Scherman’s virtuosic use of encaustic (a mixture of wax and pigments) – a technique in which he is peerless. The paintings’ eroded, encrusted, dripped and scorched surfaces and the layered process of their creation strongly evoke the passage of time. The faces that stare out at us emerge from history, yet their translucent surfaces glow with physical immediacy.

The Napoleon series is followed by a collection of paintings evoking various of the protagonists and events of the French Revolution, some of them strikingly juxtaposed with their perceived counterparts in the Third Reich. Thus Marat (arguably the first person to make effective use of the daily press for political purposes) is placed alongside Goebbels (the first to use documentary film for sustained political ends), and the painter Jacques-Louis David meets his match in Albert Speer: similar personalities, similar career trajectories. Powerful and disturbing questions are raised by these extraordinary parallels, and it becomes clear that Scherman is deploying his art both to produce remarkably compelling portraits and to examine some of the darkest areas of the human psyche.

The book contains three texts: Jacques Henric provides a dynamic account of the cultural and historical importance of Scherman’s work and the frame of reference from which it springs, Hans Belting and David Moos discuss the specific project and execution of the Napoleon series, and an interview with Tony Scherman by Sanford Kwinter and Bruce Mau illuminates the artist’s motivation, practice and concerns.

TONY SCHERMAN was born in 1950 and received an M. Art postgraduate degree from the Royal College of Art in London in 1974. Since then he has lived and worked in Toronto. His paintings have been widely exhibited in solo and group exhibitions in North America and Europe.