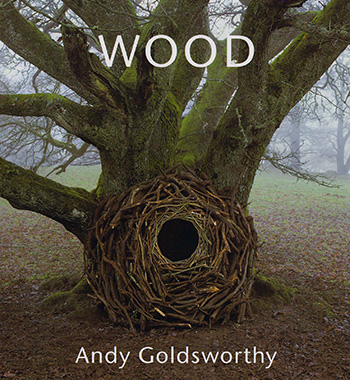 Also published in German as Holz (Zweitausendeins), in French as Bois (Editions Anthèse) and in Dutch as Hout (Terra).

In Wood, Andy Goldsworthy offers a compelling exploration of the nature of wood as he has come to know it.

The book’s sections, entitled Earth, Seed, Root, Branch, Leaf and Tree and prefaced by extracts from the artist’s working diaries, point to its organic structure. Luminous throws of dust in a wheat field convey Goldsworthy’s sense of the earth breathing; a snowball poised near the base of a huge, protective tree in a snow-bound field suggests the seed; a serpentine line of bracken leaves pinned with thorns and a snaking sand sculpture in a museum of Egyptian antiquities jubilantly echo the root undulating through the ground; two reconstructions of branches in Alaska – one smoothly looping, the other jagged and angular – reflect the contrasting qualities of wood; a delicate chain of yellow leaves droops into a dark, quiet pool and meanders through fallen, floating leaves before climbing effortlessly back into the boughs of the tree from which it came.

Woven through the book are intriguing glimpses of a ballet, Végétal, in which dancers build, dismantle and rebuild versions of Goldsworthy’s sculptures on stage – a collaboration with Ballet Atlantique-Régine Chopinot – which draws fascinating parallels between dance and the process of making sculptures, evoking a sense of the strengths and delicacies to be found both in nature and in the human body, and the randomness but also the patterns and flows to be found in the organic world.

Wood culminates with a striking and peculiarly intimate revelation of the artist’s relationship with a particular corner of landscape in his home territory. A vast, ancient oak tree provokes a rich succession of responses as the seasons ebb and flow, some clearly drawing on ideas first tried out in other places, others arising from the moment. The extraordinarily low temperatures and heavy snowfalls in south-west Scotland in January and early February 1996 have their own witness here. The Capenoch Tree is a triumphant expression of the strong impulse evident in Goldsworthy’s work to allow one work to lead quite directly to the next, for the dismantling of one sculpture to be the first stage in creating a new one.

The introduction was written by the late Dr Terry Friedman, an architectural historian who curated the first major retrospective in 1980 of Goldsworthy’s work at the Henry Moore Centre for the Study of Sculpture, Leeds City Art Gallery.