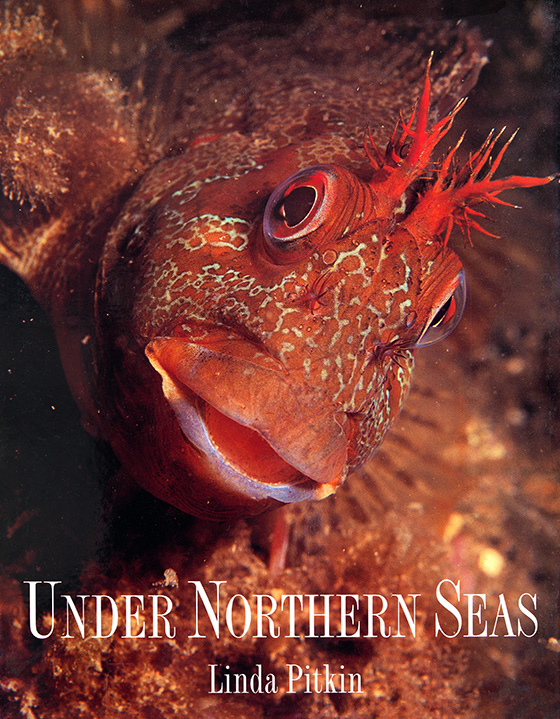 UNDER NORTHERN SEAS
Photographed and written by Linda Pitkin

Below the often grey waters around the coasts of northern Europe lies a rich world of astonishing colour and variety. The fascinating and spectacular marine life that we know from television documentaries, magazines and books is usually associated with the tropics. So it comes as a magnificent surprise that the marine flora and fauna found in the seemingly inhospitable waters of the northern hemisphere can be so extraordinarily beautiful.

Splendid dahlia anemones, as large and colourful as the most gorgeous of the flowers after which they are named, soft corals, some brilliant yellow, others pastel-coloured, and the tiny tompot blenny that peeps out of holes in rocks and wrecks with an air of inquisitive, wide-eyed surprise are among the inhabitants of northern seas.

Even creatures whose names are familiar present an amazing sight alive in their natural habitat. Most beach strollers will at some time have found the remains of a cuttlefish – the inert, calcareous shell that bird fanciers buy for their budgerigars – but the shimmering animal itself is endlessly fascinating with its quicksilver appearance, complex set of responses to other animals and ability to use the rapid expulsion of waste in a jet-propelled backwards escape from danger. A jellyfish is not a pretty sight when it has been washed up, but very different in its live state: a diaphanous dome moving gracefully through the water like a fringed balloon. Even the fish we eat can be a considerable surprise in their natural surroundings: the sole lies almost entirely invisible against the sandy sea floor except for its iridescent protruding blue eyes; a monkfish tail on a fishmonger’s slab would hardly lead the buyer to imagine the huge jaws and seaweed-like protrusions of the whole anglerfish from which it comes.

Under Northern Seas presents the whole range of underwater marine life in northern coastal waters from sponges and worms up to fish and mammals. Linda Pitkin’s remarkable and beautifully composed pictures brilliant bring to life a mysterious and seductive world that is surprisingly close at hand. The conservation-slanted text covers the natural history of the animals and plants portrayed. This is a book that will attract everyone interested in nature and offers a benchmark of quality for anyone who has thought of taking pictures under water.