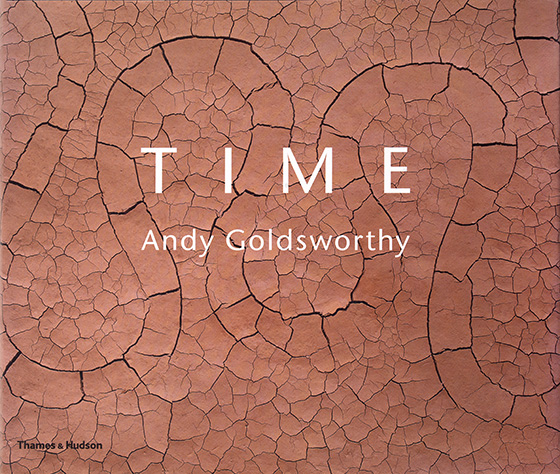 Also published in German as Zeit (Zweitausendeins), in French as Le Temps (Editions Anthèse) and in Dutch as Tijd (Terra).

Time celebrates, with a wealth of work made predominantly in the 1990s, the many ways in which Goldsworthy’s art is informed by or evokes the passage of time.

Goldsworthy is concerned above all with time as it is made manifest in the processes of nature – ‘Movement, change, light, growth and decay are the life-blood of nature, the energies that I try to tap through my work.’ Early on, his predominantly ephemeral works spoke principally of a particular place at a particular time. Gradually, the emphasis broadened to encompass references to the history of a place or landscape, and an acknowledgement that a work would change as it disintegrated. This book demonstrates an increasing interest in the future of a work, a sense that its completion marks the start of its life, the beginning of a journey.

Sometimes the outcome of a work is actively anticipated, made possible by extensive knowledge of natural processes: a snow-covered Scottish hillside yields a huge, rectangular line of compacted snow that becomes ever starker as the surrounding snow melts, until it fades away itself; clay walls or floors are intended to dry out and crack, on occasion revealing previously invisible forms embedded within them. Other sculptures are completed with no other certainty than that the elements, the growth of plants and trees, or the intervention of people or animals, will determine their future – an unpredictability anticipated by Goldsworthy for whom revisiting a piece to discover its progress or fate is as important as making the work in the first place. Some pieces are intended for a certain time of day or night: a structure of re-formed icicles is made for a shaft of early morning sunshine, an enveloping structure of branches around a rock is left half open for the day and closed for the night, and there are works that are made possible only by specific conditions of temperature, humidity or wind.

The book is structured around six locations where Goldsworthy has worked over recent years – the semi-desert of Sante Fe, the verdant landscape of New York State in which Cornell University is set, Nova Scotia, forest and coastal areas in Holland, a geological reserve in the south of France and, of course, the area around his home in south-west Scotland. Rich insights into his working methods are provided by the artist’s diaries which deliberately document the failures as well as the successes and vividly evoke the ways in which Goldsworthy familiarises himself with a new locale and begins to ‘touch’ it.

An erudite and fully illustrated chronology compiled by the late Dr Terry Friedman provides a account of Goldsworthy’s career from 1975 to 2000, showing, among other things, how particular forms often take many years to become fully developed.

With a rich selection of over 500 photographs, Time is an invaluable reference source on Goldsworthy’s sculpture.