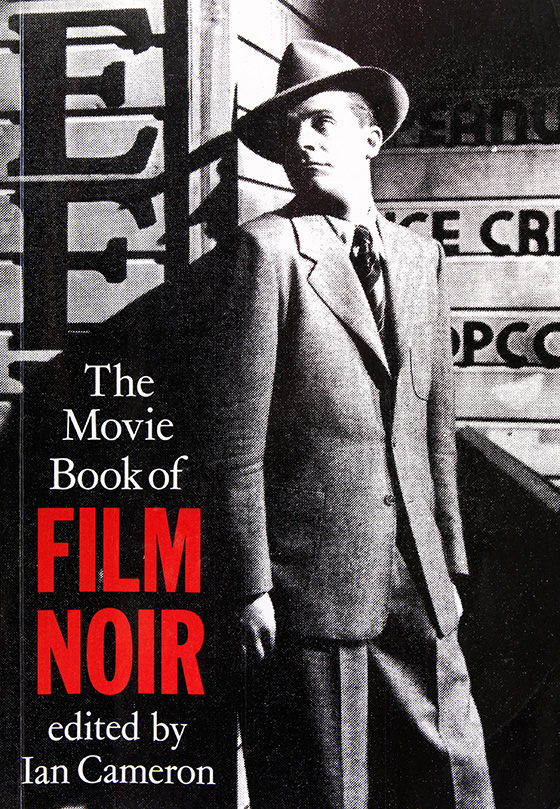 Currently out of print. A paperback reprint will be available in 2016, distributed in the UK and Europe through Roundhouse.

THE MOVIE BOOK OF FILM NOIR
Edited by Ian Cameron

Film noir, with its darkly urban settings and its population of gangsters and femmes fatales, cops, private eyes and fall guys, gave the American cinema many of its finest films of the 1940s and 1950s – among them Double Indemnity, The Big Sleep, Out of the Past and Kiss Me, Deadly. Its central characters were frequently criminals, sometimes attempting in vain a last big job that would allow them to escape to a new life. In a world that should have felt liberated by victory, failure or the threat of it haunted the petty criminal, the potential fall guy, the tired gumshoe and the two-bit femme fatale.

The genre brought together an unrivalled assembly of talent: directors such as Orson Welles, Howard Hawks and Billy Wilder, writers including Raymond Chandler and William Faulkner, and stars like Humphrey Bogart, Robert Mitchum and Barbara Stanwyck. Aimed at the informed filmgoer and the film student, The Movie Book of Film Noir provides a definitive account of the phenomenon of film noir and in-depth analyses of many of the most notable movies, among them The Big Sleep, Double Indemnity, Out of the Past and Kiss Me, Deadly, and of the film noir revival in the 1970s and 1980s.

THE POLITICS OF THE MALADJUSTED TEXT Richard Maltby

HOW HOLLYWOOD DEALS WITH THE DEVIANT MALE Deborah Thomas

THE MAN’S MELODRAMA: The Woman in the Window and Scarlet Street Florence Jacobowitz

OUT OF THE PAST a.k.a. Build My Gallows High Leighton Grist

THE LADY FROM SHANGHAI: Betrayed by Rita Hayworth Andrew Britton

IN A LONELY PLACE V.F. Perkins