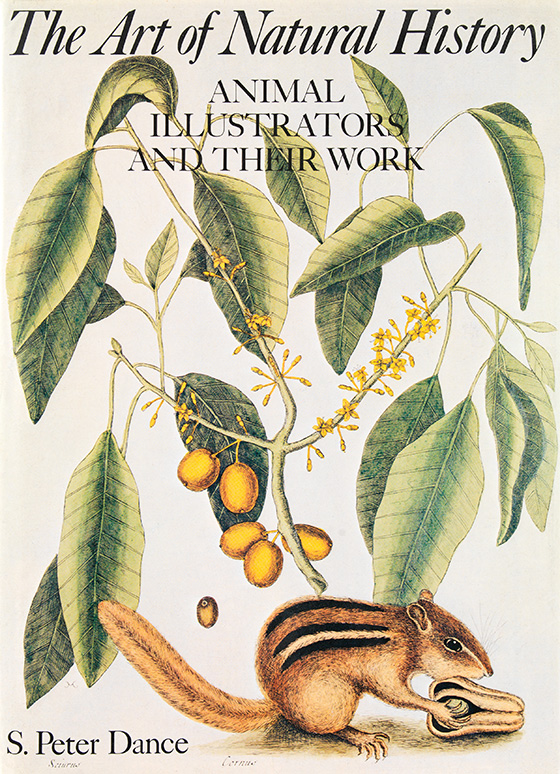 THE ART OF NATURAL HISTORY
Animal Illustrators and their Work S. Peter Dance

This lavishly illustrated book surveys the development of animal illustration from its origins through the periods of its finest achievement.

No previous book has attempted to cover the history of animal illustration as comprehensively as this one. The animals illustrated come from every part of the planet and the artists represent every country that has contributed to this art. Included are strikingly coloured insect pictures from Holland, exquisite French bird and mammal engravings, and beautiful if anthropomorphic pictures from German popular natural history books.

Present here and distinguished for their charm, zoological accuracy, or both, are illustrations from the fine American natural history books of Audubon, Catesby, Abbot & Smith and Elliot. The great artists from other countries are here as well: Wolf’s birds, Chenu’s shells, Roesel van Rosenhof’s frogs, Harris’s insects, and Haeckel’s medusa.

The subjects are drawn from the various branches of the animal kingdom, from birds, mammals, reptiles and fish to molluscs, sea anemones, butterflies, and even microscopic animals.

Without sacrificing scientific accuracy, this book is written and published for a general readership which appreciates classic illustrative work. Celebrating the beauty of the animal kingdom as well as the glories of zoological literature, this volume is as irresistible for its visual attraction as it is invaluable for the information it presents.

S. Peter Dance is among the world’s leading writers on shells and shell collecting. Before becoming an antiquarian bookseller and dealer in watercolours, he worked for many years at the British Museum (Natural History) in London, the Manchester Museum, and the National Museum of Wales, Cardiff. He has undertaken lecture tours in the United States and Australia and has appeared on television and radio on both sides of the Atlantic.