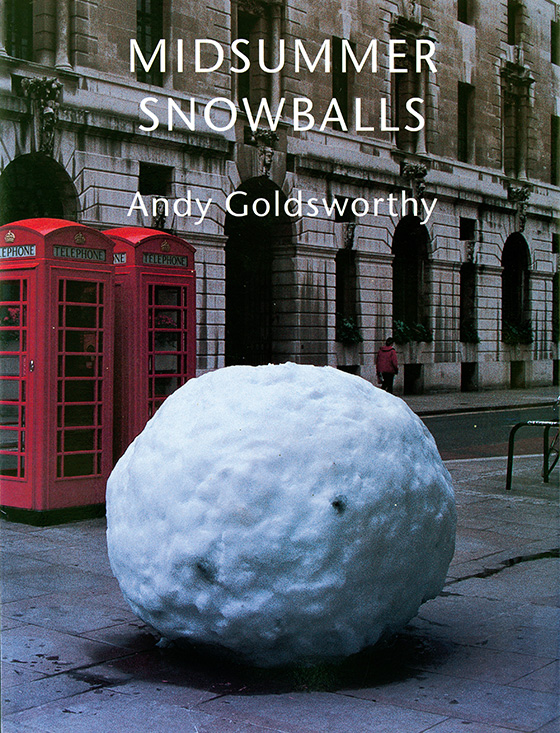 Just after midnight on 21st June 2000, Midsummer Day, artist Andy Goldsworthy supervised the unloading of thirteen huge snowballs from refrigerated trucks onto the streets of the City of London, the capital’s financial district. What took place as an astonished public came upon these snowballs – each several feet in diameter and weighing about a ton – is captured here in spontaneous and evocative pictures taken by photographers working around the clock over the several days it took the snowballs to melt.

The idea for this, Goldsworthy’s largest ephemeral work to date, came out of his longtime preoccupation with cold in general and snow and ice in particular. In earlier works, Goldsworthy has carved or shaped snow into monumental but transient sculptures, used its virgin surface to draw on, placed snowballs as punctuation marks in the landscape, and, mixing snow with other materials, produced striking works on paper by allowing the mixtures to melt. Another of Goldsworthy’s recurrent themes, time, also plays an important role in Midsummer Snowballs: made high in the Scottish Highlands in the last two winters of the twentieth century, the snowballs were stored and then unwrapped to melt slowly in London in the first summer of the twenty-first. This is four-dimensional sculpture in which the life span and history of the snowballs are as important as their appearance at any moment.

The snowballs present a unique and unexpected confrontation between the landscape of wilderness and agriculture and that of the city. Concealed within them, and revealed little by little as they began to melt, was an assortment of materials gathered mainly from the land around Goldsworthy’s home in Scotland: elderberries, ears of barley, wool, crow feathers, sinuous beech branches, chalk, river pebbles, and even rusting barbed wire and discarded chunks of agricultural machinery. Some of these items contain allusions to London’s past, when it had a relationship to the land that has been almost totally lost under the streets, shops, and office towers of the modern city. Occasionally the reference is more direct: placed beside the great meat market of Smithfield was a snowball containing the hair of Highland cattle. A fourteenth snowball, brought into the Curve Gallery of London’s Barbican Centre, made a brilliantly coloured drawing on the floor as its contents, ground Scottish red sandstone, were left behind as the snowball melted.

The huge snowballs amazed, delighted, and sometimes affronted the passers-by on that Midsummer Day, and the wonderful photographs show people gazing, touching, smiling, laughing or walking by and pretending to ignore the enormous mass of snow on the pavement. Particularly entranced by the snowballs were children, many of whom had never seen snow except on television, and even those who had were astonished by the pure brilliant whiteness of the mountain snow, something never seen in the grey city.

The introduction by art historian Judith Collins places the snowballs in the context both of Goldsworthy’s own work and that of earlier painters and sculptors. The story of the snowballs is told by Goldsworthy himself.