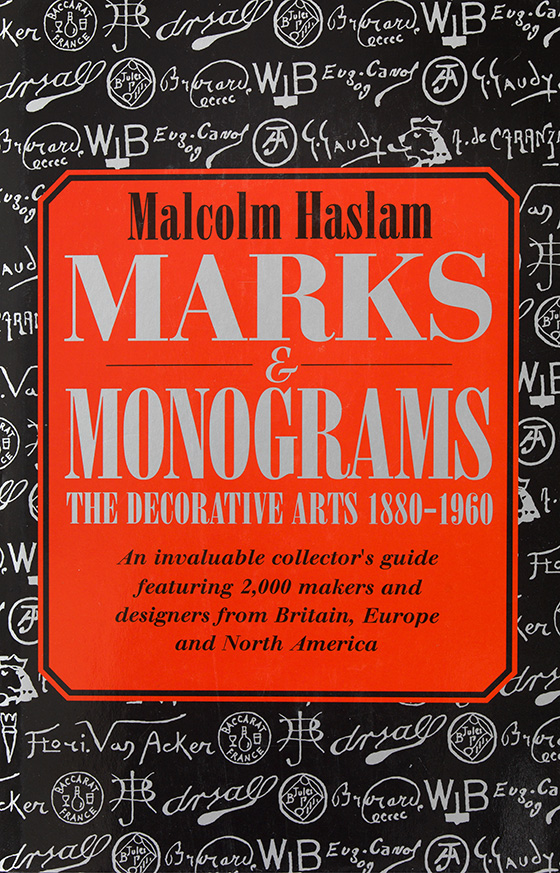 Marks & Monograms is unique among marks books for the breadth and period of its coverage. Dealers and collectors are no longer restricted by the old idea of antiques being over a hundred years old, and the period 1880-1960 illustrates the marks of around 2000 designers and makers in the decorative arts in Britain, Europe and North America. It takes in the main artistic movements of the time – the Aesthetic Movement, the Arts and Crafts Movement, Art Nouveau, Vienna Secession, Art Deco, De Stijl and the Bauhaus.

Covering ceramics, metalwork, jewellery, glass, furniture, graphics and textiles, Malcolm Haslam’s book includes illustrations of many marks and monograms not represented in other reference works. The marks are classified by both medium and country, and they are accompanied by brief information about each designer or manufacturer, making the book an invaluable aid to the collector.

Malcolm Haslam studied history of art at the Courtauld Institute, London. For several years he was a dealer in works of decorative art, co-founding the firm of Haslam & Whiteway in 1972. Since then he has written books on many aspects of the decorative arts, including monographs on The Martin Brothers, Potters (1978), William Staite Murray (1984), Elton Ware (1989) and Arts and Crafts Carpets (1991). He also wrote the very successful survey of twentieth century design, In the Nouveau Style (1989) and contributed to its companion volume, In the Deco Style (1987). He has contributed to the Sotheby’s Concise Encyclopedias of Furniture and Glass, and he has written many book and exhibition reviews for the magazine Crafts. He is a keen collector, specialising in studio pottery and decorative books, but he admits that he will buy anything as long as he likes it and the price is right!

Revised and much enlarged edition of Malcolm Haslam’s Marks & Monograms of the Modern Movement (1977).