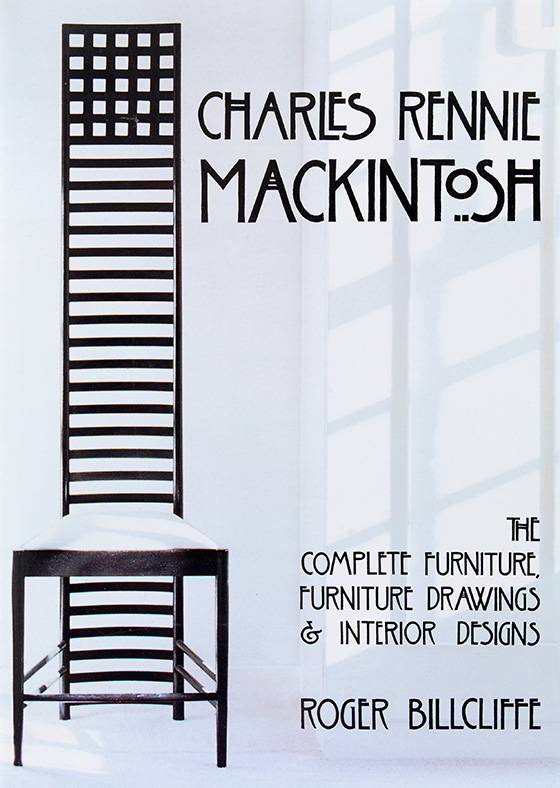 A few copies of earlier editions of this book (first published 1979), with between 750 and 800 illustrations, are available direct from Cameron & Hollis. Please email jh@cameronbooks.co.uk for details.

Thirty years after the first publication of Roger Billcliffe’s ground-breaking catalogue raisonné of the furniture of Charles Rennie Mackintosh, the new and completely revised fourth edition appeared. The text has been updated throughout to take account of all the discoveries and developments in Mackintosh scholarship. Newly discovered pieces are described and illustrated, and many items that were previously shown in black and white appear in colour, so that there are now over 900 illustrations including over 250 in colour.

For Mackintosh, who saw architecture as the art that encompassed all the other visual arts, the design of furniture and interiors formed a vital part of his architecture. The exhibition rooms, interiors and even single pieces of furniture, which were eagerly sought after by his European clients and colleagues, were designed with the same care as his major architectural commissions.

In a working life of only twenty-five years, Mackintosh designed over 300 pieces of furniture, a number that seems all the more impressive as the majority were produced in the periods 1897-1905 and 1916-1918.

After an introduction in which Billcliffe perceptively analyses Mackintosh’s career and scholarly interpretations of it, the book is arranged as a complete chronological catalogue of Mackintosh’s work as a furniture designer. As well as the entries on individual designs and pieces, the catalogue includes essays on Mackintosh’s major commissions and on his designs in general at specific periods of his career. Contemporary photographs are used extensively to show interiors (many of them now destroyed) as they were at the time of their completion. Pieces of furniture that cannot be traced are listed by reference to the work books which record the details of designs by Mackintosh or the firms of which he was a member.