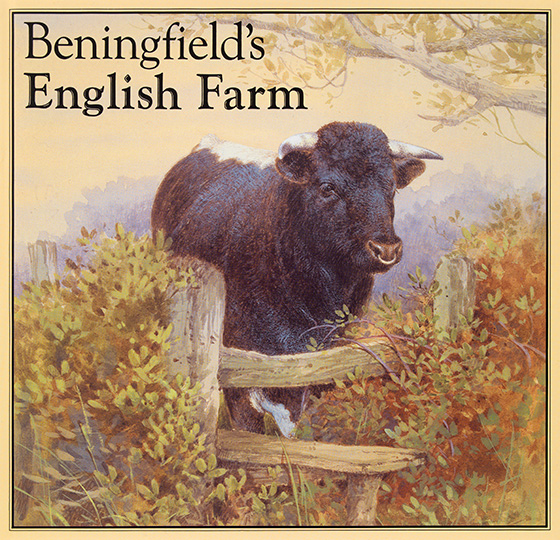 Gordon Beningfield’s reputation as Britain’s leading countryside artist was built up through his meticulous and affectionate paintings and drawings of the English countryside as it has been, should be, and sometimes still is. In Beningfield’s Farm, he has set out to celebrate that most characteristic feature of the countryside, the traditional farm and its animals.

The animals were not difficult to find, at least in ones and twos. Here are such magnificent creatures as the White Park bull and the Gloucester Old Spot pig, not to mention Lincoln Longwood sheep, Suffolk Punch horses, Light Sussex chickens, and Golden Guernsey goats. But because the numbers of these animals have so dwindled, many of them are now classified as rare breeds and are preserved in farm parks where they have become a major attraction.

The proper surroundings for the animals were much harder to find, as the traditional small mixed farm is now something of a rarity, and it is even more unusual to find unspoiled farm buildings. While the animals are painted from life, the fields and farmyards in which they are paced have often found their inspiration in Gordon Beningfield’s memories of the English countryside of forty years ago. At the very least, many of the settings have had to be restored in his pictures to their original state.

The product of this effort is a richly nostalgic portrait of all the inhabitants of the traditional farm: not just cattle, sheep and pigs, but working horses and donkeys, chickens pecking around in the barn yard, ducks by the pond, lop-eared rabbits, a shepherd’s dog that is very unlike the collies of today and, of course, a ginger tom on the prowl.