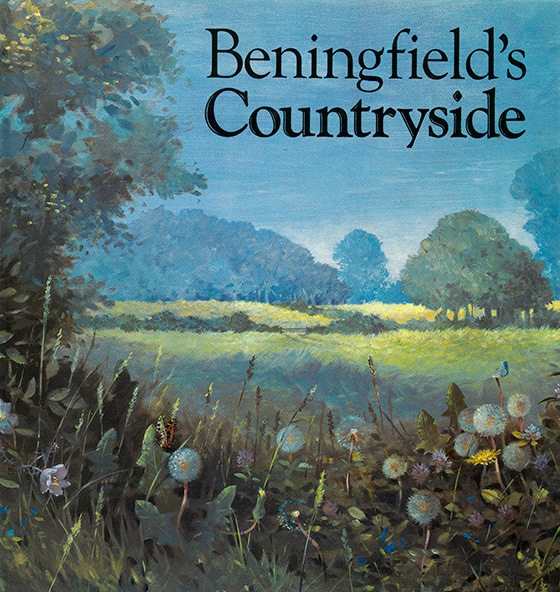 In this book, Gordon Beningfield celebrates a classic countryside that was once typical of much of England, much of which has increasingly falling victim to modern intensive farming and the spread of urbanisation. Gordon Beningfield’s world is centred on the gentle, rural landscapes of Hertfordshire and the open downs and lush valleys of Dorset.

Here are the dense, leafy hedgerows with their rich variety of flowers, offering cover to a wealth of creatures but only a hindrance to the plough. The lush, sweet-scented water-meadows he portrays so evocatively are equally shrinking before the onslaught of mechanical diggers and drainage schemes promoted by those who see the balance sheet of the countryside as being purely a matter of finance. Even the broad-leaved woods, which provide tantalizing glimpses of deer and badgers, cannot compete as a cash crop with alien conifers.

Gordon Beningfield was almost unique among artists who have made a reputation painting wildlife since he was also a perceptive and gifted landscape painter. Beningfield’s Countryside combines intimate close-ups of animals and flowers with broad landscapes that provide a setting and at the same time convey a powerful feeling for the special qualities of English scenery. In these fine pictures, Beningfield’s talent as a painter of landscapes is displayed to the general public for the first time.

In his text, his sketches and his exquisitely detailed watercolours and oil paintings, Beningfield reveals himself to be a skilled and observant naturalist. Beningfield’s Countryside is irresistible in its evocation of the small-scale pleasures of the country –a pile of nuts neatly opened by a dormouse, a fox basking only half asleep in a shaft of sunlight, a yellowhammer singing boldly from the top of a hawthorn bush. Beningfield’s deep involvement in the rural life of England is unmistakeable in his portrait of the traditional countryside so shaped by man’s endeavour, it is fitting that he should also look at human artefacts, at the wooden gates and stiles and the stone bridges that blend with their surroundings in a way that barbed wire and tubular metal do not. In all, Beningfield’s Countryside is a moving visual tribute to a countryside that is universally loved.