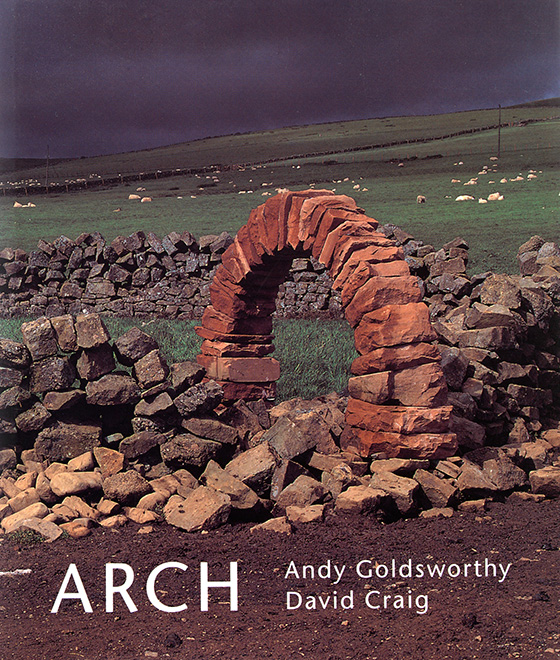 In Arch, Andy Goldsworthy is working in his home territory, as he traces the route along which sheep were once driven from Scotland over the border to markets in England. A red sandstone arch, made of blocks hewn from a Scottish quarry, begins its journey in a dilapidated stone sheepfold deep in the hills of southwest Scotland. From there it progresses south, often constructed in the evening and dismantled early in the morning, in a rich variety of locations: on the site of a vanished stone sheep pen in a town centre, on land high above a six-lane motorway, half-in and half-out of a stream running through lush pastureland.

Some of the drove roads, which fell out of use with the arrival of the railway, have survived as tracks across isolated areas of Cumbrian hillside; others have developed into modern roads. Sheepfolds, simple dry-stone enclosures, dot the countryside. A few are still maintained, many exist in various state of ruination, some have disappeared altogether. Working from maps that identify the ancient sites of sheepfolds, Goldsworthy has used this rich seam of rural history to select stances for the arch on nits journey south.

While Andy Goldsworthy lives close to the start of the arch’s route, the writer with whom he has collaborated lives near its end. David Craig shares with Goldsworthy a deep concern with the history of the land, touching in his writing both on its ancient physical origins and on the lives of the people who have lived and worked on it over the centuries. His evocative account charts the travels of the arch and its reception in the various communities through which it passes.