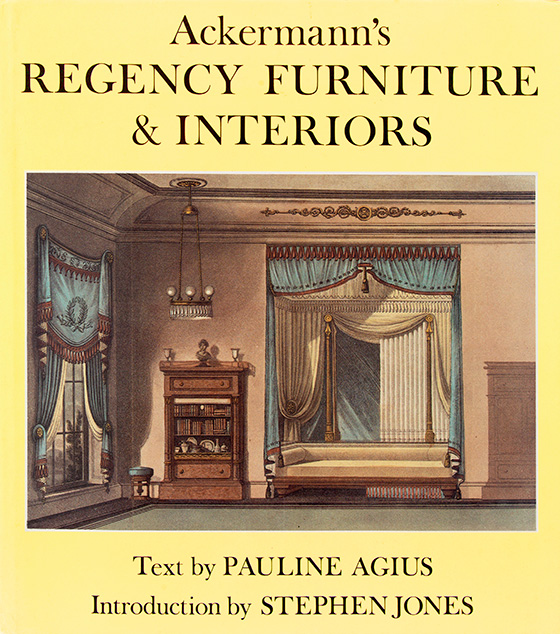 No record of Regency society is more vivid than Rudolf Ackermann’s celebrated journal, The Repository of Arts, Literature, Commerce, Manufactures, Fashions and Politics. Published from 1809 to 1828, it devoted space to all things fashionable and every month for almost twenty years included hand-coloured plates of furniture, drapery and interiors, providing an unrivalled visual record of Regency taste and design. In Ackermann’s Regency Furniture & Interiors, nearly two hundred of these plates have been assembled for the first time in a single volume, together with their accompanying descriptions.

Ackermann was an astute populariser, identifying what was fashionable at the time and presenting it to the public. It is therefore possible to follow the decorative ideas of the Regency period from year to year. Early issues of The Repository enthusiastically promoted the Grecian style, which has come from France and was introduced to London particularly by Henry Hollands and Thomas Hope; later issues reflect the arrival of the French Empire style, with its Roman allusions, developed by the designers Percier and Fontaine. Sometimes Ackermann’s plates represent the particularly English taste for the picturesque. The revived Gothic style is depicted most notably in the remarkable series of plates by the elder Pugin, and the Egyptian style also figures prominently.

Ackermann’s descriptions provide a wealth of detail about materials, finishes and colour schemes. Stephen Jones’s introduction sets The Repository in the context of late eighteenth-century and early nineteenth-century design, and Pauline Agius traces and explains the developments represented in Ackermann’s illustrations and descriptions.

Since complete sets of The Repository are now extremely rare and many of the plates have not been reproduced since their original publication, the appearance of this book is an event of major importance for anyone interested in the Regency period, including collectors, furniture historians, antique dealers, interior decorators and television, film and stage designers, as well as those involved with restoring and recreating Regency houses and everyone who derives a special pleasure from the elegance and richness of the period.

Stephen Jones read English and History of Art at Magdalene College, Cambridge, specialising in neo-classical architecture and design. He was curator of Gainsborough’s House at Sudbury in Suffolk, and subsequently of Leighton House in London. He lectured on 18th- and 19th-century art at the Victoria & Albert Museum and wrote the volume on the eighteenth century for the Cambridge Introduction to the History of Art series.

Pauline Agius read history at University College, London, after her studies at the Bartlett School of Architecture were interrupted by the war and service in the WRNS. She is the author of the pioneering study British Furniture 1880-1915 (1978) and a collector’s handbook China Teapots (1982), and was an active member of the Furniture History Society for more than twenty-five years.