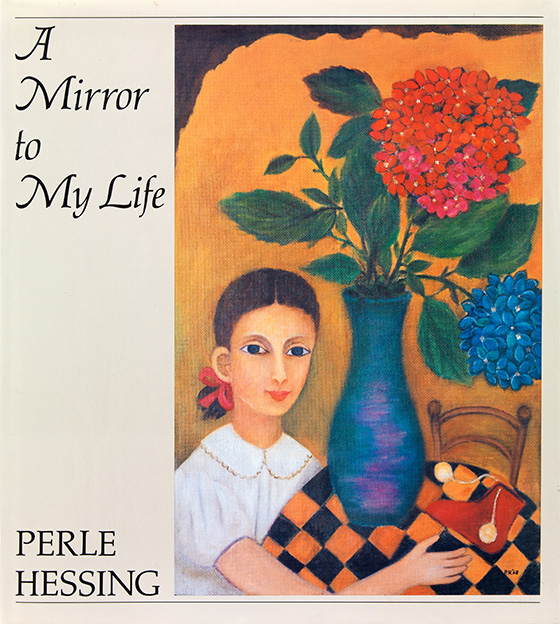 A MIRROR TO MY LIFE
Perle Hessing

The inspiration for Perle Hessing’s boldly conceived pictures came from all the influences and experiences of an eventful life. She was born in Galicia, a region that was then part of the Austro-Hungarian Empire. Her father, a craftsman printer and bookbinder, told her stories from the Bible and recounted old Hasidic tales which, with scenes from family life in Central Europe, form the main strand in her painting. Included here are strikingly personal interpretations of biblical subjects such as Adam and Eve Mourning Abel, David and Bathsheba, the Vision of Ezekiel and the Flight into Egypt.

Literature and music provided other sources of inspiration: Goethe, Gogol and Mussorgsky are all represented. Perle Hessing’s painting provides a wonderful panorama of a cultural heritage shared by millions of people throughout the world.

The events of Perle Hessing’s adult life also influenced her work, giving rise to poignant images stemming from the Holocaust, and scenes of life in Israel, Australia and England. There can be few painters whose subject matter stretches from the ghetto of 16th-century Prague to the Great Barrier Reef and from the life of Spinoza in 17th-century Amsterdam to the hubbub of Speakers’ Corner in present-day London.

The paintings themselves combine a kind of innocence and an exuberant use of colour with a highly personal and often sophisticated vision. Her talent for compressing many parts of a story or aspects of a scene into a single composition produces an extraordinary richness and emotional complexity, often simultaneously touching and humorous.

In this book, the summation of her oeuvre as a painter, Perle Hessing provides her own commentary to a selection of her finest work in colour. The overall effect is as much spiritual autobiography as art book.

Perle Hessing was born in 1908 in the small town of Zaleszczyki in Galicia, which subsequently became part of the Soviet Union and is now in western Ukraine. From the age of six, she was brought up in Czernowitz, the capital of the Bukovina, where she married her philosopher husband and where their son was born. An entirely self-taught artist, she began to paint when she was in her fifties and living in Australia, where the family had settled after World War II. Perle Hessing’s paintings have been reproduced in many anthologies of naïve art and have been widely exhibited in museums and galleries in Australia, the United States, France, Switzerland, Germany, Venezuela, Israel, the Czech Republic and in Britain, to which she moved in the 1970s.